QR codes are a type of two-dimensional barcode that can be read by smartphones and other devices with a camera. They are commonly used to provide a link to a website or to provide additional information about a product. While QR codes don't technically expire, they can become outdated if the linked content is no longer available. For example, if a QR code links to a website that has since been taken down, or if the product it links to is no longer for sale, the QR code will no longer be useful. If you're using QR codes in your marketing, it's important to keep an eye on them to make sure they're still working. Otherwise, you risk frustrating your customers and damaging your brand. 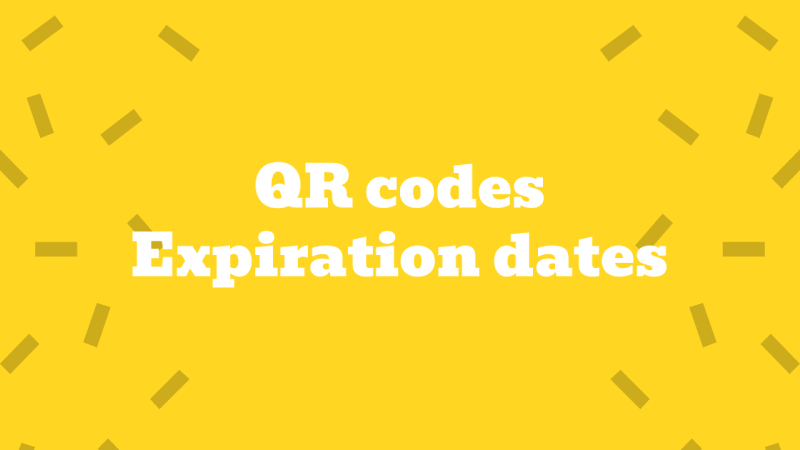 Do QR Codes Have an Expiration Date?

Are QR codes like fine wine, getting better with age? Or do they go bad after a certain amount of time, like milk? Let's explore the answer to this question: do QR codes have an expiration date?

First, let's define what we mean by "expiration date." When we're talking about QR codes, we're talking about the point at which the code stops working and can no longer be scanned. So, if you've ever tried to scan a QR code and it wouldn't work, that QR code has expired.

Now that we've got that straight, let's answer the question: do QR codes have an expiration date?

The short answer is: it depends.

The long answer is a little more complicated. There are a few factors that can affect whether or not a QR code expires. Let's take a look at a few of them.

The first factor is the type of QR code you're using. There are two main types of QR codes: static and dynamic.

Static QR codes are the most common type. They're the kind of QR code you see on business cards, flyers, and billboards. They're called "static" because they don't change. The information inside the QR code is encoded when the QR code is created, and it doesn't change after that.

The second factor that can affect a QR code's expiration date is how the QR code is used. QR codes can be used for a variety of purposes, but the two most common are to open a website or to save contact information.

The third factor that can affect a QR code's expiration date is the type of scanner that's used to scan the QR code. There are two main types of scanners: camera-based and laser-based.

Camera-based scanners are the most common type. They're the kind of scanner you see built into smartphones. They work by taking a picture of the QR code and then decoding the information inside.

Laser-based scanners are less common, but they're growing in popularity. They work by shining a laser on the QR code and then decoding the information inside.

We all know that QR codes are those funny little black and white squares that can be found on everything from product packaging to street signs. But did you know that QR codes actually have an expiration date? That's right, those pesky little codes can become obsolete after a certain amount of time, rendering them useless.

So, why do QR codes expire? There are a few reasons. First, the technology behind QR codes is constantly evolving. That means that the codes are constantly being updated to reflect the latest changes. As a result, older codes can become outdated and no longer work with the latest QR code readers.

Second, QR codes are designed to be read by machines, not humans. That means that they're subject to the same error rates as any other machine-readable code. over time, the error rate for QR codes increases, making it more likely that a code will be unreadable.

Finally, QR codes are meant to be used for specific purposes. For example, a QR code on a product package might be used to track inventory or to provide information about the product. Once the product has been used or the QR code is no longer needed for that purpose, it expires.

So there you have it, three reasons why QR codes expire. Now you know what to do when you come across an expired QR code – just move on and find a new one!

How to prevent your QR code from expiring

If you're like most people, you've probably seen a QR code and thought to yourself, "That looks like it would be really useful… if only it didn't expire so quickly!"

It's a common problem with QR codes – they're often used for time-sensitive promotions or campaigns, but they have a limited shelf life. Once the campaign is over, the QR code is no longer valid and can't be used again.

So how can you prevent your QR code from expiring? Here are a few tips:

When you create a QR code, you have the option to use a static URL or a dynamic URL. A static URL is a permanent URL that will never change, even if the campaign is over. A dynamic URL, on the other hand, is automatically generated and is only valid for a certain period of time.

2. Use a URL shortener

If you're using a dynamic URL, you can extend the life of your QR code by using a URL shortener. URL shorteners are services that take a long URL and shorten it to a shorter, more manageable URL.

3. Use a QR code management service

There are a number of QR code management services that will allow you to track and manage your QR codes. These services will often let you edit the destination URL, so you can change it even after the QR code has been generated.

If you're planning on using your QR code for a long-term promotion or campaign, you should print it on durable materials like PVC or metal. This will help to prevent the QR code from being damaged or destroyed.

5. Store your QR code in a safe place

When you're not using your QR code, it's important to store it in a safe place. This will help to prevent it from being lost or damaged.

By following these tips, you can help to ensure that your QR code has a long and healthy life.